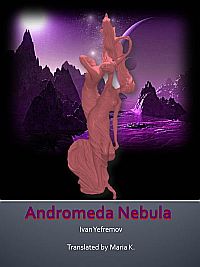 Categories: Science Fiction and Fantasy, Translations, Yefremov I. A.

Ivan Yefremov (1908 – 1972) was a Soviet writer and paleontologist. In addition to introducing a new paleontological field taphonomy – the study of fossilization patterns, Yefremov has written a series of novels and short stories, including science fiction, historic fiction, adventure and drama.

Yefremov is frequently ridiculed for his enthusiasm and faith in the viability of a communist society, as described in his best known science fiction novel “Andromeda Nebula”. What is frequently overlooked is Yefremov’s tremendous knowledge of history and profound understanding of psychology. His future society, while highly evolved, is not impervious to mistakes. His future humanity, having learned and discovered much, is not pausing to rest on its laurels – it continues to learn and explore.

It is not widely known that his more mature works such as “Hour of the Bull” and “Razor Blade”, had the writer blacklisted by the Soviet government, as Yefremov’s interpretation of a fair and balanced society deviated sharply from the government propaganda of the time.

To Yefremov’s fans he is known for his thorough scientific analysis, study of art and history, emphasis on physical and intellectual balance and strong female characters.