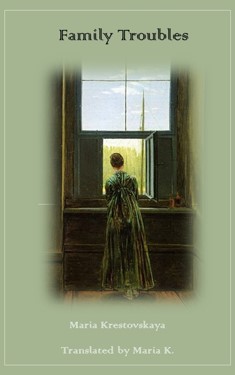 Literary critic, E. A. Koltonovskaya, described the literary style of novelist Maria Krestovskaya as follows, “Her pen, for all its feminine agility, is often remarkable for its nearly masculine reticence. She has none of the chaotic flood of thoughtless emotions, which so frequently plagues the works by female writers. She does not like lyrical diversions and allows her characters to speak and act for themselves. Even during the most dramatic scenes, her tone remains restrained. Her formulation of women’s issues gives one the sense of a broad, universal foundation. There is none of the narrowness, exclusiveness, and bias so prevalent in the topic as described by ideological feminists.”

The story that follows is quintessential Krestovskaya – complete with humor, deftly delivered touches of real life, and ample food for thought.